Consilience is the fusing together of different domains of human knowledge revealing that how the brain works is different from popular conceptions. It provides a new and powerful approach to understanding human behavior, illuminating how communications work to change the way people behave.

Qualitative researchers operate at the intersection of three, sometimes incompatible, ways of thinking: business managers who have a mindset grounded in economic and academic theories related to markets; agencies that employ the skills of the creative arts, including design and writing; and the realities of individuals whose behaviors rarely conform to tidy categorizations and theories. Consilience reconciles these contrasting domains, enabling practitioners to navigate among them with more confidence.

Consilience is rooted in recent breakthroughs in biology, genetics, computing, and other disciplines that allow us to come to terms with the realities of how our brains work. Armed with this knowledge, we can make sense of the disconnect between market metrics, such as purchase frequency and self-reported attitudes, that have been profoundly perplexing.

Marketers Not Knowing the Earth Is Round

For example, consider the findings of market statistician Andrew Ehrenberg. During his 50-year career, Ehrenberg analyzed purchasing patterns in more than 300 markets across five continents and modeled them using a single mathematical equation known as the Dirichlet formula.

The late Ehrenberg was awarded the Gold Medal of the British Market Research Society twice; first in 1969 and again in 1996. In addition, the (American) Advertising Research Foundation honored him with a Lifetime Achievement Award in 2010. Even with all of these accomplishments, the marketing community largely ignored his findings.

He reported that “repeat-buying of any item from any frequently bought branded product field tends to, within certain broad limits, follow a common pattern and can be dealt with by one single theory [the Dirichlet formula], irrespective of what the brand or product is and irrespective of what other brands its buyers may or may not have bought as well.” He found these patterns not only in packaged-goods markets but also in business-to-business markets, including aviation fuel contracts, ready-mix cement, cars, computers, and medical prescriptions.

“Marketing people not knowing about [the Dirichlet formula] is like rocket scientists not knowing that the earth is round,” Ehrenberg wrote. His findings show that advertising does not work by increasing a person’s level of conscious awareness or by changing their attitude. Instead, awareness and changes in attitude follow changes in purchase behavior.

We can start to make sense of these puzzling facts by reconceptualizing how human behavior arises. Contrary to age-old presumptions, our behavior is not the result of conscious thought processes, and verbal explanations for our actions are poorly correlated with actual behavior patterns.

Behavior Is Not the Result of Thinking

Western academic culture is underpinned with various presumptions about the connection between knowledge, reason, and behavior. It is customary to believe that knowledge leads to conscious deliberation—that is, thinking—that then results in behavior. This picture is akin to visualizing the human brain working in a way similar to how a computer handles and processes information.

This portrayal is being overturned by a largely unreported scientific revolution that has been underway for the last two decades. New technologies have made it possible for researchers to observe the brain in action and to see what is happening genetically and chemically in each cell of the human body.

It has become clear that actions we think of as dissimilar, such as manipulating an object with our hands, writing, and speaking are, at a neurological level, almost identical. Each requires fine muscular coordination. However, activities we consider simple, such as walking and looking, are in fact extraordinarily complex, requiring extremely fast and fluid muscular action.

Brain-scanning technologies have established that conscious thought processes are slow—taking upwards of half a second—too slow to be responsible for the moment-to-moment movements that constitute how we navigate through the world, react to what is going on around us, and handle social interactions.

The Human Brain Is a Different Kind of Challenge

I contend that the brain’s basic biological processes and how they have evolved are relatively straightforward to understand, especially for those interested in the scientific details. The whole matter of understanding how human behavior comes about, however, is unusually challenging to comprehend because the findings of frontline researchers conflict with traditional academic perspectives.

One such perspective is that the human brain is considerably more sophisticated than the brains of other animals and that consciousness was a relatively recent evolutionary development. This perspective is being upset through discoveries in genetics that provide unambiguous evidence that humans and seemingly simple animals, like tiny roundworms, have remarkably similar genes.

It is becoming evident that consciousness is a core functionality of animals that began evolving about 540 million years ago for the practical purpose of sensing the whereabouts of food and predators and acting accordingly and quickly.

Other academic perspectives found in many textbooks are also demonstrably incorrect. For instance, emotions cannot be separated from perception and rational thought. Attention, emotion, and rationality are indistinguishable at the level of biological processes. 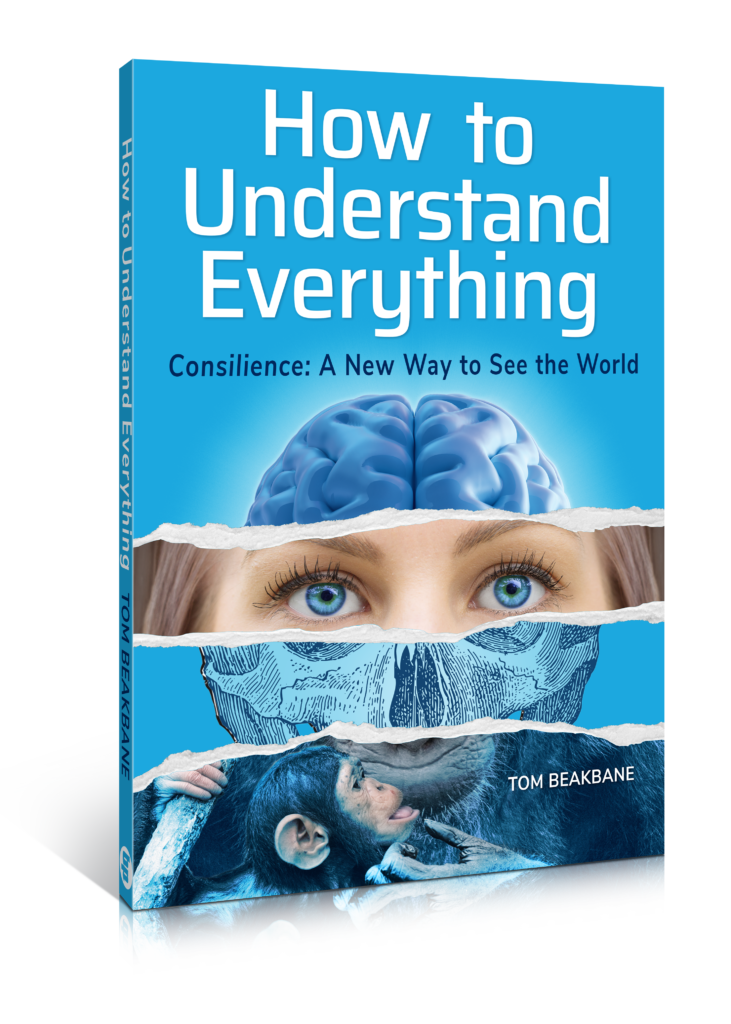 In 1998, Harvard University professor Edward O. Wilson published Consilience: The Unity of Knowledge. The book explains the history behind the fusing together of academic disciplines. One hundred years ago physics, chemistry, and biology were separate and distinct domains of human knowledge. Now they overlap, and biologists employ the discoveries of physicists and chemists to make sense of natural systems. Geneticists, using the tools of chemistry, routinely provide insights into human history and culture. This cross-fertilization among different disciplines enhances our ability to understand everything.

Wilson envisaged that the process of unifying knowledge would continue on the same trajectory through the application of science-like principles. In particular, evolutionary theory would enable scientists to unravel the complexities of human behavior. But, surprisingly, scientific and academic ways of thinking are turning out to be far from all-encompassing.

Now armed with an understanding of how our sense organs work, how neurons handle complexity, and how we attach words to concepts, we can see that human knowledge is a domain that plays a relatively small part of what occupies our neuronal systems.

Neuronal systems are primarily occupied with making sense of our surroundings, maintaining our bodies in a state of health, and responding, through muscular action, accordingly. The domain of knowledge, supported by words, plays a relatively trivial role.

Contrary to Wilson’s expectations, consilience reveals that knowledge is just one piece of a larger, more complex puzzle. Knowledge is not all-encompassing and able to explain everything. Academic and scientific knowledge is built socially; it is dependent upon the use of words and cannot be disentangled from the quirks of human interactions.

Behavior Is Quicker and Deeper than Thinking

When frontline scientists use slow-motion video to observe the unfolding of interpersonal encounters, it becomes apparent that seemingly discrete events, when carefully analyzed, are made up of smaller microbehaviors emergent within a particular situation. For instance, when mom hands her baby a block, we conceptualize it as the baby wanting the block and reaching out to grasp it. In fact, the baby’s arm moves in concert with the mom’s. In other words, their behavior merges from that particular context.

Conscious introspection and our verbal accounting of our behavior is not a robust starting point for understanding human motivations and purchase behavior. Early in my career, while refining pack designs for various brands of beer, I observed how research analysts, when conducting individual interviews, were attuned to the respondents’ body language, noting how long their eyes rested on each design. The analysts did not attach much importance to the respondents’ verbal accounts of their motivations for evaluating the effectiveness of a design.

That is not to say that respondents’ verbal accounts lack significance. We are a profoundly social species, and we are constantly, at least subliminally, aware of the consequences of our behavior. When beer drinkers purchase and consume a certain brand, they do so within a landscape of social meaning. Everyone, when pressed, can provide an explanation of their behavior, often along the stereotypical lines of, “I prefer the taste,” or, “It’s good quality.” Brand-builders need to understand how respondents express themselves in order to develop the insights from which effective messaging can be created.

One of the core tenets in consumer goods marketing is that the first few seconds of a brand encounter are critical. Brands are noticed or overlooked in an eyeblink. This well-established truth accords with the reality that our brains are emergent systems that work in the moment.

From the dawn of the evolution of nervous systems, their function has been to react instantly to immediate threats and opportunities. This core functionality remains and is the reason we are constantly searching for the point of people and things.

The necessity of knowing the point is one aspect of the deeply tribal nature that we observe in human society. We handle complexity—such as this subject of consilience—and need to know its point. How is it useful? We do the same with brands, immediately needing to know their purpose, which in the jargon of marketing, is termed positioning. We also do it with words that have become the banners of tribal loyalties, such as vaccines, Trump, freedom, and God.

A New Way to See the World

There is a mounting trend to make sense of human society through the lens of science and academia. I argue this view is constricted and willfully blind to the realities of interpersonal dynamics and the lessons of history.

Consilience demands that we take a higher, all-encompassing perspective. On an individual level this is challenging because each of us has to walk back from established patterns of thinking. When we hear words such as science, thinking, consciousness, and religion, we need to recognize that, similar to all words, their meaning is cultural and constantly changing.

My contention is that the human brain is no more a deep mystery than other organs. I argue that thought leaders in all disciplines need to understand the implications of what scientists have been discovering about our neuronal systems, the emergence of communications, and human nature.

Traditional ways of conceptualizing human behavior are similar to undertaking planetary travel while believing the earth is flat or trying to program a computer without knowing how semiconductors work.

I believe practitioners in the qualitative research field have the mental flexibility to understand consilience and put it to use. At the least, consilience provides a solid foundation for:

More broadly, a realistic understanding of human nature can benefit society in many ways. Consilience can be employed by educators to better equip future generations with the skills they need to handle the challenges of modern life. I dream that consilience will transform the political landscape and help us collectively reconcile the widening rifts in society.