From the fall of 2006 to early 2008, I was obsessed with Second Life, a virtual world where users could create and customize an avatar, purchase virtual land plots with real money, and build virtual structures bound only by the limits of their imaginations. While the equally obsessed business media saw it as the epitome of Web 2.0 technology, I saw it as a potentially game-changing market research platform that would give new meaning to online qualitative especially.

Companies were developing “virtual world strategies” in a manner reminiscent of the euphoria surrounding the web in 1997 and TikTok’s momentum right now. The May 1, 2007, Business Week cover story chronicled Anshe Chung, an avatar who had amassed virtual land holdings worth more than $250,000. The magazine even ventured that Second Life could mount a challenge to Microsoft’s dominant Windows operating system.

And then, in a flash, it seemed that Second Life vanished from the headlines. What happened? Why did an application, where the likes of Starwood, Reuters, and Cisco had a presence, become back page news? And where is it now?

First, What Is Second Life?

In case your memory of Second Life is hazy or you have never even heard of it, it is important to understand what it is and what it’s not.

As Linden Lab is a private company, user statistics are difficult to obtain. The company seems to waver between reporting registrations, total users created, residents, and monthly active users (MAU, which is the average number of users who logged in during each month of a quarter). (http://wiki.secondlife.com/wiki/Linden_Lab_Official:Linden_Lab_economic_metric_definitions).

Official numbers paint a portrait of growth but may not recognize the large number of users who download the application, login once, and then never come back.

In a recent interview with VICE News, Ebbe Altberg, the current CEO of Linden Lab, stated that Second Life has about 900,000 active users. He also noted that the COVID-19 pandemic has resulted in an uptick of users. “While businesses have consistently used Second Life for remote meetings and training for many years, we are seeing a significant increase in demand now as organizations seek out online solutions that offer something more engaging than video conference calls,” Altberg told VICE.

Regardless of the numbers, it is safe to assume that usership and overall interest declined after 2007 simply due to the rise of Facebook, Twitter, YouTube, and other social networks. Undoubtedly, the COVID-19 pandemic has benefited Second Life as locked-down people have sought out new (and old) ways to connect with one another. Yet, Second Life remains a niche interest at best. 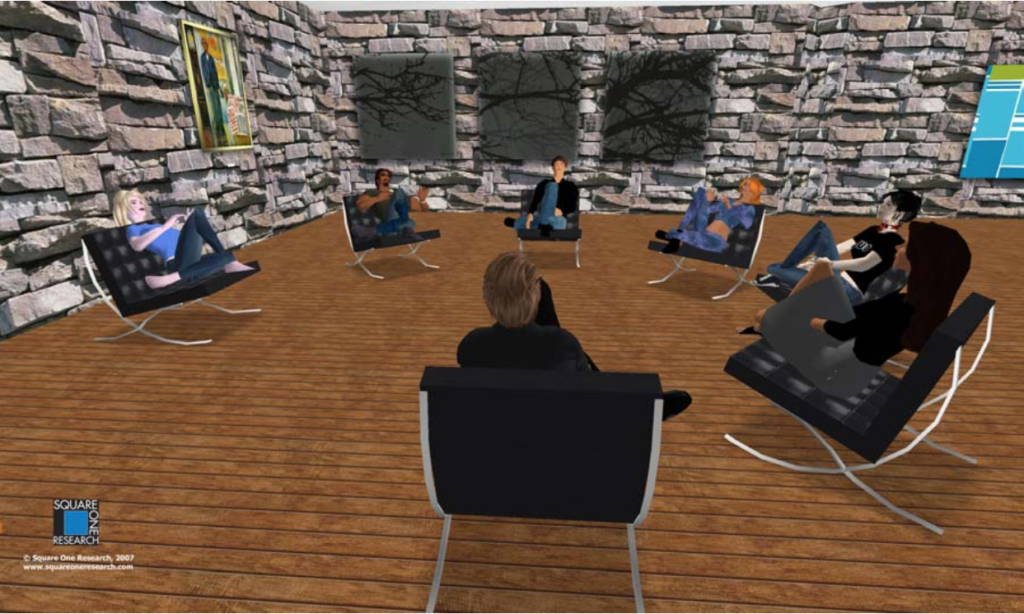 Second Life allows researchers the opportunity to interact with respondents in a virtual space that can be designed as a living room or a store environment. 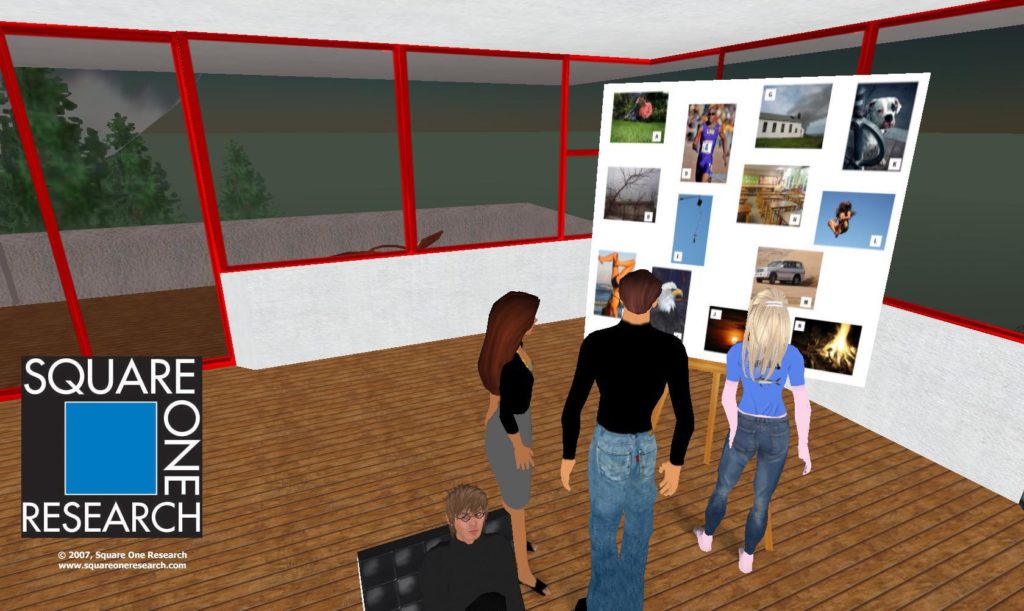 Understanding the Appeal in 2007

In true qualitative research fashion, when I first joined Second Life, I was obsessed with understanding the appeal. To that end, we built a virtual office and hastily recruited a random group of users for a virtual focus group to simply learn how users got interested in Second Life and what kept them coming back for more.

Users spoke of Second Life as what they originally envisioned the internet was supposed to be—more personal than a chat room with the ability to have genuine real-time interactions with people from around the globe. Second Life also gave them freedom to do things they might not be able to do in the real world, whether that was visiting a virtual destination or being a different version of themselves.

Sex can often be the first activity to exploit any new technology and Second Life was no exception. As one user put it, “The mind is the biggest and best sex organ. You can interact here with complete strangers, have a mind-blowing experience, and not have to face them over breakfast the next morning.”

People could also flex their entrepreneurial muscles on Second Life much more easily than in the real world. It was an incredible creative outlet for design, music, and even virtual hairstyling. One of the group’s participants mentioned, “I like the fact that the money here has actual value, and you really can set up a business just trading virtual stuff and ideas. That’s incredible.”

In the spring of 2007, we built a larger office on our own private island. To do that, we hired a landscaper, an architect, and a general contractor—all virtually! The result was perhaps the most stunning qualitative venue ever. I recall simply gazing into the monitor wishing that real facilities could be similar. We also ratcheted up recruitment efforts to create a panel of 3,000 users.

Yet, after conducting some groups for our own purposes and a few for some of our most forward-thinking clients, we ultimately abandoned our virtual island and panel. Second Life seemed to be stagnant. It was hard to find new panelists, and businesses that dipped toes in the virtual water quickly seemed to pull them out of it. Not to mention, Facebook would soon become the rage. It was difficult to convince anyone of the potential of a virtual world when an online real one was giving them so much more.

The Second Time Around

The sudden onslaught of the COVID-19 pandemic and the total shutdown of in-person research forced me to look for ways to make online qualitative more immersive. It reminded me of what I had hoped to accomplish with Second Life originally and nudged me to take a second look at it.

I had long ago lost the username and password for my Jonathan Sellers account, so I had to create a new avatar. After downloading the application and logging in, I chose a stock male avatar and plunged into the default setting for newbies.

What struck me first was not the world around me on screen but rather my computer’s fan. Back in 2006, I remember Second Life taxed my PC’s resources. I am a Mac user now and all computers’ graphics capabilities are far more advanced than back then, but Second Life seems to be just as resource intensive.

My avatar’s default “look” (‘70s style print shirt, bell bottom jeans, and no shoes) needed to change, but I found the process of editing my appearance no easier than before. After a few attempts to get my hair and face to resemble my real-life guise, I gave up and simply changed into a more fashionable suit. I managed to make it to a men’s clothing emporium where I was able to purchase an ensemble that felt more like something I would wear in the real world. Try as I might though, I was unable to find a pair of orange glasses. I would have likely hired a virtual optician to make a pair, but could not connect with one. I assumed virtual sex would still be a big draw and some conversations with various avatars confirmed my assumption. I journeyed around Second Life in May, right before the end of mass social distancing. As one avatar put it, “I can’t go anywhere but here. My sex life is now virtual like it or not.”

The Potential for Virtual Worlds

My recent experiences with Second Life have not rekindled an interest to spend more time there. However, it’s been interesting and given me perspective on Second Life’s meteoric rise into oblivion and why it might still have trouble growing.

Yet, I remain bullish on virtual worlds, at least for research purposes and especially now in the context of COVID-19. Imagine if one of our clients created a virtual store environment that we could take people through where they could purchase digital items. What if users could build exact scale replicas of their homes and then invite us in for a virtual in-home interview? There is likely to be a melding of virtual worlds and augmented and virtual reality technology. Prices for virtual reality headsets are declining, and the technology is only getting better.

There were other virtual worlds before Second Life and there still are (i.e., Minecraft, The Sims, Sansar, World of Warcraft). It’s not always possible for us to imagine what comes next. Yet, we do know there is an inexorable progress of technology. For now, however, perhaps there is an opportunity for a virtual world that is more like real life.